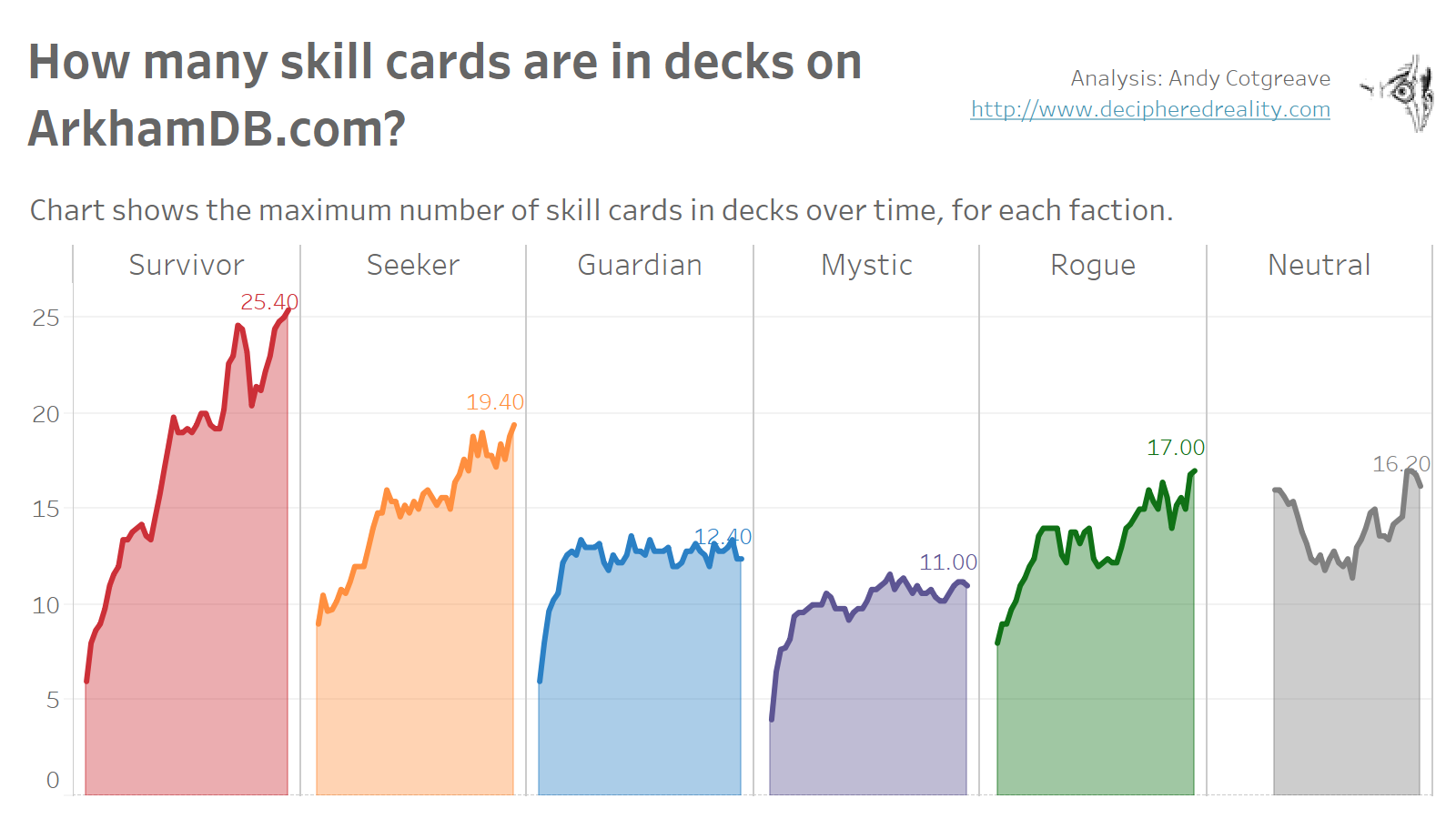 A thread on the excellent Drawn to the Flame Discord server inspired this: Jesse (TheBlackHorror on ArkhamDB.com) suggested people are putting more skills cards in their decks than they used to.

Let’s take a look. Here’s the average and maximum number of skill cards in decks created each month since ArkhamDB.com span up in 2016:

The average number of skills has remained the same since 2016, but the maximum number has trended upwards. It seems that Jesse’s right. Right? I figured it would also be useful to look at the max skills trend by each faction too:

The max is clearly heading upwards in Survivors, Seekers and Rogues. It’s less pronounced in Guardian and Mystics. Lola is, as always, all over the place! Perhaps we *can* say more people are using more than before.

Scrybe then suggested that this is merely investigator dependent. “Someone like Silas is going to include lots of skills compared to others.”

Survivors have the highest average amount (8.7 skills per deck), whereas Mystics are down at the bottom (just 5.1 skill cards per deck). There are only 9 mystic skill cards, compared to 16 for the rogues, so perhaps it’s time Mystics saw some love in the skill card area?

(Note: If you’re wondering why the y-axis needs to go up to 30+ in the chart above, it’s because, yes, there really is a deck made of just 32 skill cards on ArkhamDB.com).

Next up, how about each investigator. Does Silas have the most?

Scrybe correctly predicted Silas as having the most skills (16.5). Patrice is a predictable second, I think: she’s got to have cards to pitch each round. Scrybe also guessed Sefina and Leo would be the lowest. Sefina (4.2) is very low compared to other investigators. Only Luke and Dexter are lower. However, since they’re relatively new, they don’t have enough published decks to make their numbers reliable.

There you have it. Across all investigators, 7-ish skill cards is the sweet spot. The maximum number of skill cards has crept upwards, perhaps indicating the changing card pool and tastes of the Arkhamdb.com community. But as ever, the devil is in the details.

Why has the average number stayed constant? Jesse’s conclusion is this:

So, interesting point about the skill cards…

Ideally, great deck flow means that, on average, you have the assets in hand when you need them, you’re finding the right assets you need to succeed, you have the right icons in hand and enough of them, etc. And in a perfect world you don’t use actions to get a resource or draw a card. If any of you have played Patrice, you’ll know exactly what I mean 😉

I had started to noticed that this kind of “slot system” people end up using (2-4 hand assets, 2-4 allies, 2 accessories, 6-8 skills, etc) is quite common because that tends to create a pretty optimal Deck Flow. You’ll notice that “6-8 skills” is pretty much that average of 7! And this tends to be the number of skill cards that works best in most investigators

From Jesse (The Black Horror) on Drawn to the Flame Discord

What do you think? Have you been using more skills than ever before? Let me know in the comments.

As always, an inquiring mind will lead to new deductions, and ultimately, true understanding.

[EDIT: Nick Messinger on Facebook asked about the median: has that changed? The median is less sensitive to outliers like Silas. The answer is below: it has also lingered low, at around 6 per deck. It’s actually trending downwards a little. Thank you Nick for asking the question!]