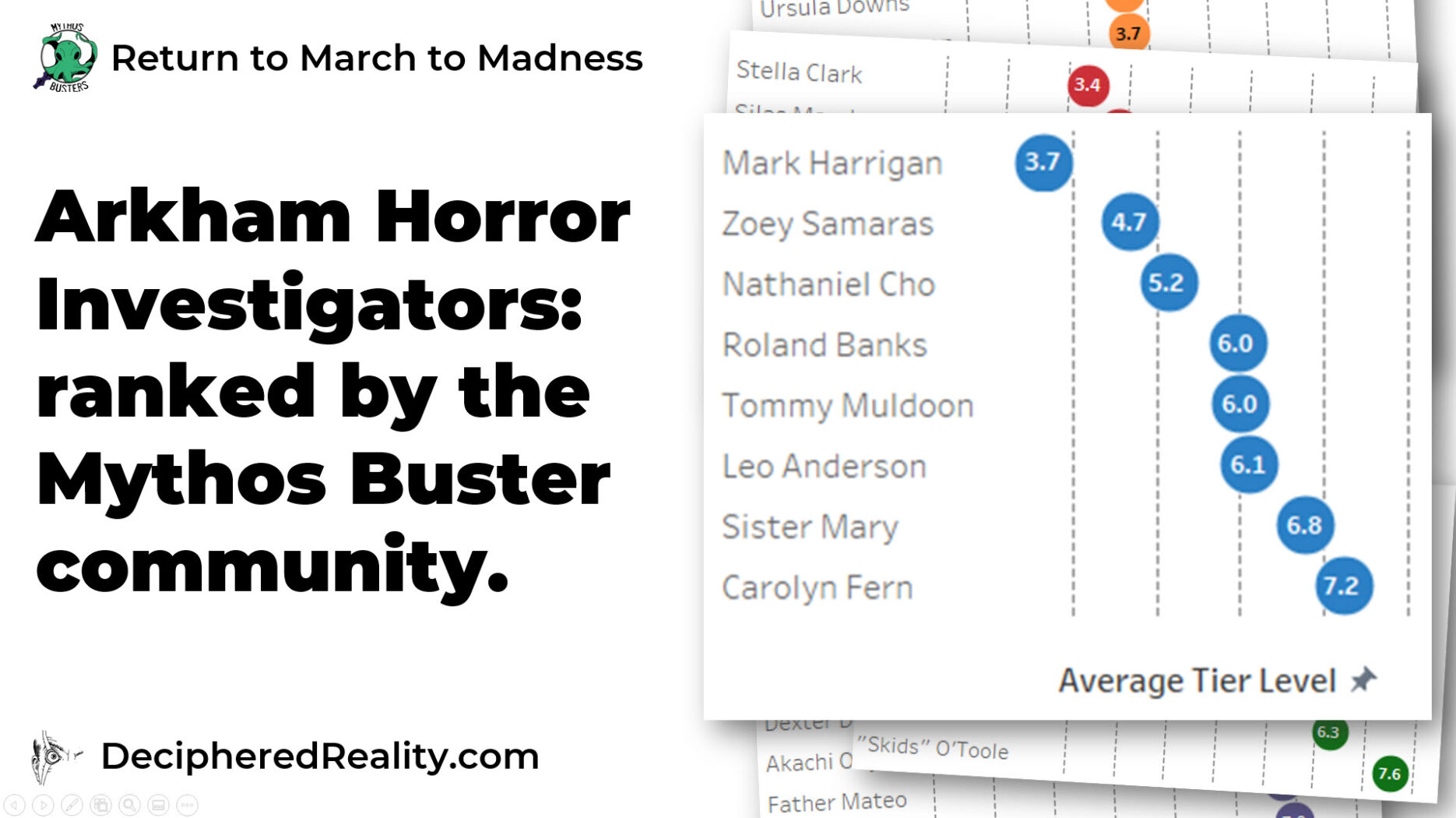 Welcome back to the second post of a series looking looking at the data behind the Mythos Busters’ Return to March to Madness tournament. In the previous post, I looked at which investigators were most placed in Tiers 1 and 10.

Today: what’s the average tier score in this definitive (ha!) crowd-sourced dataset? (note: there were 10 tiers, 1-10, and the instructions were vague. Some people graded by power, others by love, others by, um, their Scrabble scores! The goal of this was to seed the bracket section, where the REAL action is going to take place. That won’t stop me analysing the numbers, and I’m sure it won’t stop you discussing them)

Mark Harrigan (average tier score of 3.7) tops the list, followed by Zoey Samaras (4.7) with Sister Mary and Carolyn Fern lingering at the bottom.

Luke just edges out Diana. Incidentally, while Luke takes top spot in the Mystics based on average score, only 17% of you put him in tier one. Clearly people think he’s great, but certainly not a GOAT. 20% of you put Diana in Tier 1, though, so she’s obviously got a more split audience: a lot of you love her, but a lot are putting her pretty far down the list, dragging the average score down with her.

Trish (4.2) edges out Tony (4.3) for the top spot. What do you make of that? The newest Rogue, and she goes straight to number 1. I’m playing Trish in my blind TIC campaign, and a friend is playing her in another TIC campaign I’m playing. It’s easy to see why Trish rules: she’s a boss with action compression and this cycle has loads of cards that are made for her.

Down at the bottom are Jenny and Skids. I can’t say I’m surprised about Skids, but I was a bit surprised at Jenny. Is it because she’s so vanilla and the kind of people who’d be involved in the game enough to complete a tier list are the kind to have tired of playing her?

Ursula, the faster investigator in town, is tied with Mandy, the deck-thinner. Special honours goes to Daisy Walker, a core set investigator who nearly beat out these two younger upstarts. Judging by the conversation already on the Mythos Busters Discord server, Ursula’s lead is controversial!

Harvey is the lonely Starter Deck investigator that remains unloved at the bottom of the Seeker pile.

No surprise to see Stella at number 1, but it’s great to see Silas a close second. I have to express personal remorse that Rita’s down at the bottom of the pile for Survivors. Why, community, why? I think Rita is great.

The average tier score by class? Looks like Survivors just edge out the dodgy claim to be “The Community’s Favourite Class” (yes, that is a dodgy claim, but I’m owning it). It’s going to be fascinating to see how closely the final results of the bracket voting match this ranking!

Below is a chart showing all the investigators, ranked by average tier score. Congrats to Stella, Ursula and Mark for having the 3 best average tier scores. Commiserations to Lola, Skids and Rita (why Rita? I like Rita!)

I’ll be back tomorrow to compare Tier scores with popularity on ArkhamDB.com. Click here to see all the Return to March to Madness posts. In the meantime, make sure you keep up to date with the voting. 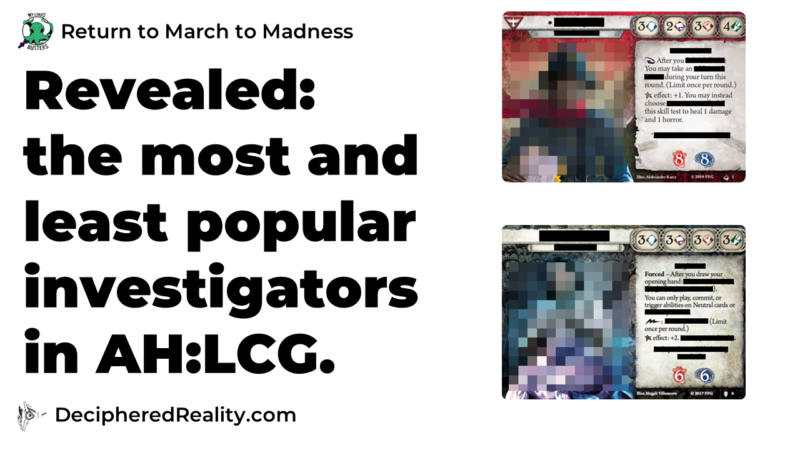 Revealed: the most and least popular investigators (according to the Mythos Busters’ community) 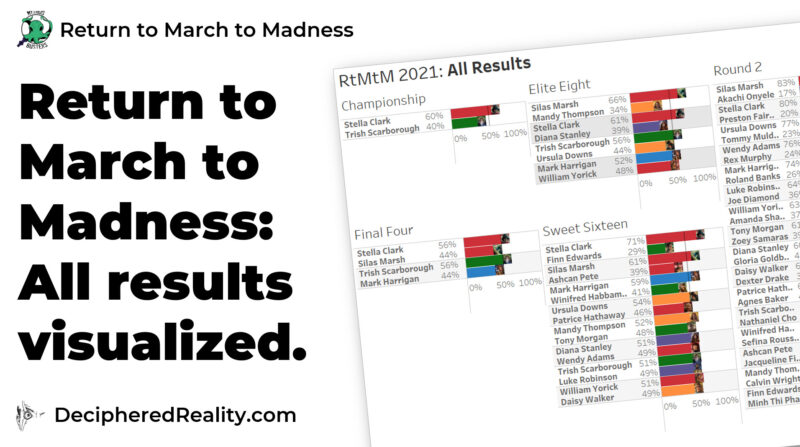