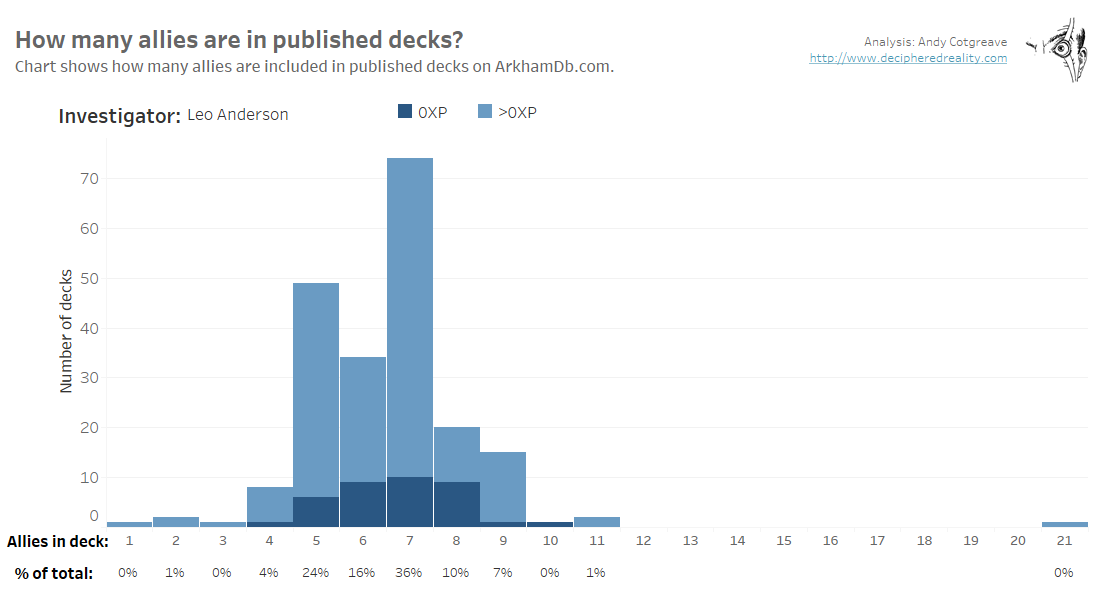 This post was inspired by Drawn to the Flame’s episode on Leo Anderson. With Leo, you’re going to be thinking about allies. Frank and Peter considered the question, “How many allies should you put in a Leo Anderson deck?”

Among the 208 published Leo Anderson decks on ArkhamDB.com, the most common number of allies is 7, which includes Mitch Brown, Leo’s signature card.

Lots of people also pack 5 allies. And one brave soul created a 21-ally Leo deck (“The Skull Buries Them All“)! I’m not sure it’s practical. There are a couple of 11-ally decks (here and here), they look like they’d work.

If 7 is the most popular for Leo, how does that compare to all investigators?

As you can see, the sweet spot is 2 allies. 3,634 published decks (July 2019) have 2 allies. There’s another, smaller, peak at 4 allies. I’d have thought more people would put 4 allies in a deck, but perhaps that’s just how I play.

Which allies does Leo use?

Beat Cop, Guard Dog, and Leo top out the list.

I hope you’ve enjoyed this. And if you go ahead and build a Leo Anderson deck, 7 is the sweet spot, according to the hive mind of ArkhamDB.com!

Do you want to know how many allies the other investigators have? Have a look at the interactive version here. (rotate to landscape if you’re on your phone!)